View Sardinia C2C in a larger map
With a lack of time to organise and research, this time we took what we thought was the easy option and went on a self guided organised trip with Skedaddle.  I turned out to be much harder, and more rewarding, than we could have imagined. 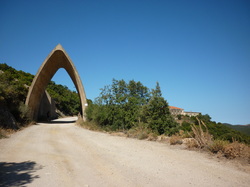 
After an extremely hot transfer from the airport to the first accommodation we had time to chill out, look at the route for the next day and go for a swim in the pool.  I haven't done any med style holidays before, and all those pictures of beautiful blue pools in baking hot sunny terraces always looked so inviting.  I learnt something today, those pools are freezing!  A quick dip to cool down was more than enough for me! 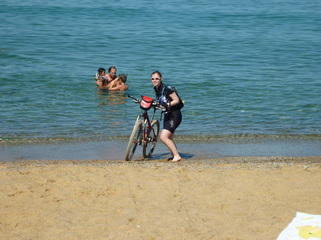 And it begins.....
Starting in the small mining of Montevechio, the first cycling day was a loop to the coast and back.  The route out was all on hard pack trails, and as you'd imagine heading to the coast, was all downhill.  The riding wasn't very technical but the views were stunning.  I don't have any idea what the large concrete arch was for, any ideas?!

This being my first coast to coast, I had to do the cheesy dipping the wheels in the sea photo.  I'm sure all the families on the beach thought I was crazy bringing my bike all the way down to the sea.  I wonder if they'd have thought me more or less crazy if I'd told them it was because I was cycling coast to coast... 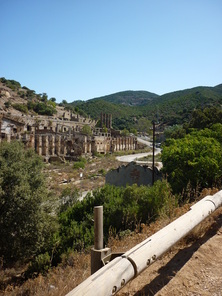 Not that we knew this at the time, but this would be a bit of a theme for the holiday, disused industrial/mining buildings and machinery.  Like this first disused mine we saw on the way down to the beach, most of the disused buildings were quite old and quaint, and almost seem to be a part of the landscape.  The sardinians do seem to have a bit of a habit of just abondaning things when they're finished with them, which as you can see in this picture, can look like part of the landscape.  The problem is that this tradition of just abandoning places when they're used up has continued to the modern day.  Cycling past modern day abandoned equipment and mining buildings doesn't quite have the same nostalgic charm as the disused mine you see in this photo.

Perhaps, in 50 years time we will look back at our present day industrial buildings with the same fondness.  Or, more likely, the crinkly tin sheds and machinery will have rusted away and will have no redeeming features at all and just be a blot on the landscape. 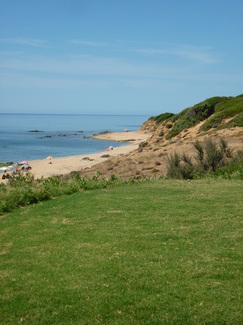 Around lunch time, it was starting to get hot, really hot.  We stopped at this fantastic restaurant with an open terrace and shared an amazing seafood platter.  We left it until around half 2 before tackling the second half of the days ride, turned out that that we should really have left it much longer, it was still incredibly hot, and climbing away from the coast, it was uphill the whole way.  The climbs in Sardinia weren't too bad, long and very gradual which suits my "sit and spin" technique of tackling hills.  With about 10km to go, I was really starting to struggle, and we'd run out of water.  I resorted to pedalling about 500m before having a little rest, and that still felt like too much.

We decided the plan for the next day to beat the heat was to start as early as possible, have loooooonnnnnngggggggg lunch to avoid the midday heat, and then finish off the days ride late afternoon.  So with the intention of having an early night we arrived on time for dinner.  Dinner was served "chalet" style and very very late, main course arriving at the table at around midnight! 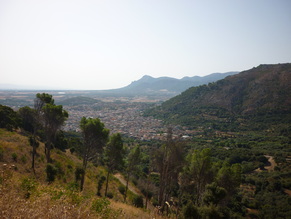 Day 2 - Across the valley

You see that valley, we came down there, across it, then up the other side.  Phew!

Then down the other side and across another valley, the valley was a boiling hot cauldron, unable to escape the baking heat.  This, in truth, was not the most interesting day but was the first time I noticed the abundance of the "prickly pears".  These things grow everywhere and are edible, if you can get into them.  They have large spines on the outside which you can see in the photo, and a fur of much smaller spines which can get everywhere if you're not extremely careful and very skilled.
Day 4 - A well earned rest day

A slightly strange day today.  Our intention had been to chill out at the agritourismo, however, there was a wedding on taking over the whole place and thought it would be it bit weird being the only uninvited guest!  So we got a lift back into Laconi and spent time stretching our legs walking around the Amerych Park and the local museums (and eating ice cream and drinking beer, mmmmmm!) 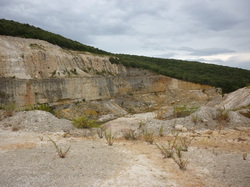 The day started with a monumental climb, initally on road, before turning into forest and continuing to climb steadily.  As before, the scars of past industry can be seen.  This photo doesn't really show the epic scale of this abandoned quarry.

From here on in, it's all stunning offroad rocky trails.  We swooped down fast descents into valleys and climbed up tough rocky paths to peaks for stunning views out to the next valley. 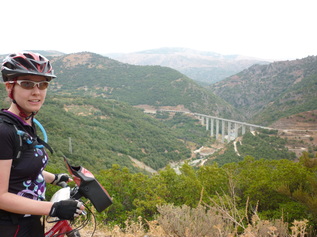 I'm in a photo!  It's usually me taking the photos so I don't make it into many of them!

After dropping into the valley, crossing the (very) high and exposed bridge you see the photo, we started what was probably the most gruelling uphill of the holiday.  This was about 20km of offorad uphill through the forest.  Admittedly, it was forest road for most of the way, but the endless switchbacks seemed to carry on forever.  Everytime one switchback was completed, another 2 or 3 could be seen above it.  Still, there was a good sense of achievement turning the corner and looking down at how far we'd come. 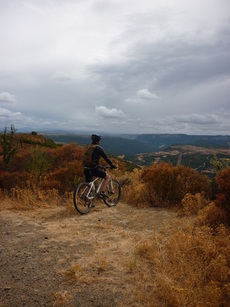 Most of the accommodation on this holiday was in what they call "agritourismos".  These are small holdings/farms which also run as half board small hotels.  The accomodation was mostly small and comfortable, never flashy but always homely and welcoming.  We knew very little italian, I wouldn't even class our italian language skills as "restaurant" standard, and once we were into the self sufficient mountain area, the locals knew no english.  They were so welcoming though, and somehow we managed to communicate and I think my extremely limited italian vocabularly got a little boost!

The best part of the agritourismos though, had to be the food.  Amazing wouldn't be an adequate description.  The mountainous area of Sardinia is more or less self sufficient, and so, most of what is served for dinner is produce from their farm.  A typical dinner was a 4 course affair.  Antipasti was olives (grown on their own trees), charcuterie (from their own animals) and handmade bread.  This was followed by fresh home made vegetarian pasta dish.  At this point I was usually feeling quite full which you'd think was fine, I'd eaten a starter and main course.  Oh no no no!  The main course was still to come which was meat (again from their own animals, usually lamb or pork) with a a fresh salad, with the tastiest tomatoes I've ever had.  Supermarket tomatoes now taste watery and bland to me! 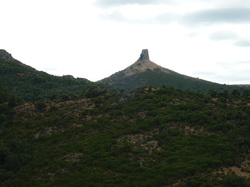 Day 6 - Another tough day in the mountains

Todays ride started with an uphill onroad climb but quickly turned into an offroad climb up through a forest.  One thing to be grateful for with the climbs in Sardinia is that they all quite gradual.  If you're like me and like to sit and spin rather than power up them, you'll have no problem making it to the top of most of the climbs on the bike, rather than pushing.  And the stunning vistas from the top are definitely worth the effort.
A short on road detour takes you to an ancient Nuraghi.  These are the traditional houses that Sardinians used to live in.  They are arranged as circles connecting onto circles.  It's difficult to tell until you see one from above, otherwise they look very random!

There was a shorter onroad option for today, however, we chose to go for the longer offroad option through a national park.  I'm glad we did as the ride wasn't challenging and the views were spectacular.  Anyone on this trip with skedaddle should definitely take this option if they haven't been struggling too much on the previous days.
Day 7 - To the coast

Today was set to be a long day, the distance being the greatest we had done all holiday.  However, starting in the mountains and heading to the coast we anticipated that the cycling wouldn't be too difficult and should be mostly downhill.  It turned out to be a lot rolling for the first half than we had anticipated and with an incredibly strong head wind (oh why is it always a head wind?!) it was much tougher than we thought it would be.

A short detour at the top of a climb to a spectacular look-out point looked like a good option for a lunch stop. It was so windy, it would have been impossible to eat lunch there. So after taking a few minutes to take in the breathtaking view, we headed back to the original route and hid behind a large road sign to eat lunch, a slightly less dramatic lunch stop!

On the final road towards Cala Gonone, there is another option to take an offroad route, and this one was a bit special!  The ascent is narrow, gravelly and steep.  It was completely impossible to ride up and was a long, hard push up, perhaps 200m of ascent or more.  The drop felt precipitous on one side.  At the top we were having a little rest and to our complete surprise a little Vespa came up with his shopping on his handlebars, how he had managed I have no idea!  The descent on the other side was amazing, through the forest.  It constantly alternated between slabs of tarmacked road so steep you had to hang off the back of the bike, to rocky and less steep trails which challenged you're mountain biking skills.  You could also do little jumps of the end of the tarmacked sections!  No photos of this section, I was having far too much fun! 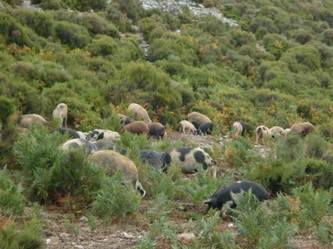 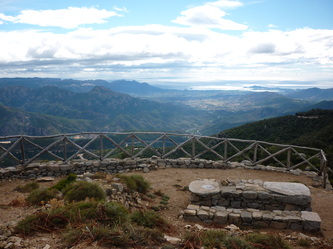 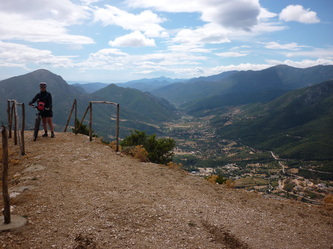 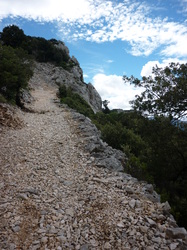 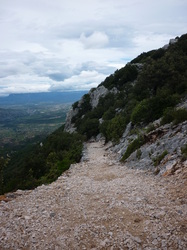 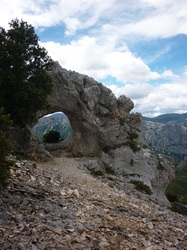 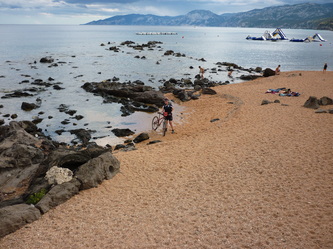 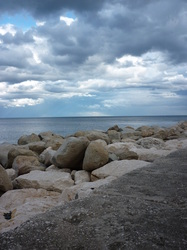 Arriving in Cala Gonone was a massive sense of achievement.  I'd crossed a country, on my bike!  We had a few beers and a relaxing evening before a transfer to Cagliari in the morning.  We also spent a couple of days in Cagliari which is a nice city for a short break with just enough to do for a few days, museums, monuments and towers and a beach close by.