View SDW in a larger map

Cycling 100 miles and 1000 metres climbing, offroad, in 3 days was probably not the easiest option for a first tour, but it was close to home and easy to organise so it seemed like a good option.  We were cycling from Winchester to Eastbourne by the famous National Parks trail, going in this direction gives the extra sense of achievement of finishing on the coast, which just somehow felt right.  We parked our car on a sidestreet in Eastbourne near the train station, and caught the train from Eastbourne to London, then changed and caught the train from London to Winchester where we were starting the cycling.

Not having done this cycle touring thing before, all the equipment for this trip had to be bought new, which took quite a lot of research.  In hindsight, we probably should have practiced racking up all the equipment and actually cycling with it before arriving in Winchester to start the journey.  My first indication that I might have underestimated the task was changing platforms in London, where I had to push the bike up 2 flights of stairs, cross the train tracks and get the bike back down 2 flights of stairs.  Some very nice man helped pushing the bike up the stairs, then after going down one flight, only just keeping the bike under control, I decided to unload the panniers and take everything down separately.  I had horrible visions of completely loosing control of it and it careering down the steps knocking my fellow passengers flying! 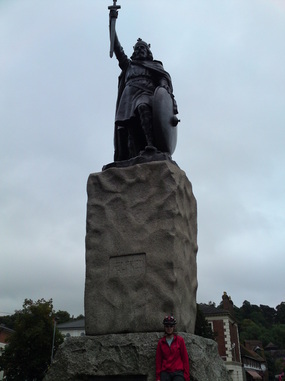 This is the semi-official start of the South Downs Way. Only one hundred miles to go then....
We used the Harveys South Downs Way map which has the entire route on one sheet.  It shows the route in multiple panes, always orientated so that when you look at it, you're always heading up, for this reason you don't get much map of the surrounding areas.  We didn't find this to be a problem, in fact, we barely needed the map as the enroute signage was so good, we only missed a couple of signs and having to back track over the total 3 days.
It has been a while since we did this tour, but the other information that we found useful.

The first night we camped at Gumber Bothy, which is basic but has a kitchen and showers.  It also has a camping barn with sleeping platforms for sleeping bag accomodation.  It's only just off the trail and very convenient for a 3 night tour.

The second night we stayed at an incredibly cheap campsite in Plumpton, I don't recall the name, but we wouldn't recommend it.  It was a clamber over a fence and a long hike across a field to the single (horrible) toilet.  We were glad to only be there for a single night.  We spent the evening in the Half moon in Plumpton which from memory served good food.  The only real problem with this location is it is off the SDW and it's a long way down off the ridge and therefore a HUGE and monotonous uphill back onto the ridge the next morning.  My calves were screaming at me by the time we got back up onto the ridge the next day.

The best resource for planning a bike trip along the SDW in my opinion is this site, particularly the section on water taps which are a invaluable along the route.