I'd wanted to go to Iceland ever since I'd started cycle touring.  I knew that it was going to be a really tough challenge, both with weather and with road conditions.  It proved to be just that. picking what turned out to be a rather wet two weeks in July, (while the UK sweltered in 30 degree heat, typical!)

Arriving at Kleflavik and a day in Reykjavik

We arrived at Kleflavik airport early on a Sunday morning and straight away leaving the airport terminal, we knew it was going to be a chilly two weeks, an arctic blast hitting me as the automatic double doors opened out of the terminal.  The total opposite of most peoples summer holidays when the step out from their air conditioned airport and are blasted by intense heat!

We had decided not to cycle from the airport to Reykjavik, but to take the Flybus plus so for the very reasonable price of £23 return each we had our transfer sorted to the B&B we were using.  While the scenery was out of the coach window was stunning, I was glad I wasn't riding as the road was very busy and full of coaches and large 4x4s.  Not exactly the kind of cycling anyone comes to Iceland for!

On unpacking the bikes and setting them back up, we found that my back rotor had got badly bent during the flight, so we decided to head into Reykjavic to try and find a bike shop, we didn't see any so asked at the tourist info.  It turned out that the only one of any real size was Markid out of the city centre.  We had to wait until the next day which was slightly anxious (aaarrggh, would they have the right part??) but they turned out to be well stocked and were happy to fit the rotor for me.

At the tourist info, we picked up an icelandic PAYG sim card to go in my phone and bought 500MB data package.  This turned out to be a very useful thing. There are two networks in Iceland, Vodafone and Simmin.  We used Simmin and found the coverage in the south west of the country to be incredibly good, getting good internet in all areas we were in. We downloaded the Icelandic Met offices app which was incredibly helpful for planning day to day what we were doing so that we could go with the weather rather battling through it!  Another app worth downloading is the emergency services 112 app which allows you not only to call the emergency services automatically giving then your location, but "check in" and call the emergency services automatically giving them you're location, so should anything happen to you in the wilderness, they have a record of your last 5 check-ins, brilliant!


We bought the Ferdakort maps from an Ebay seller before we arrived in Iceland.  This turned out to be unnecessary as the tourist office had all these maps.  They were also available from a number of the giftshops of the big tourist sites we went to outside of Reykjavik.  We found them to be almost perfect for our use, though the contours at 50m intervals meant that it wasn't possible to tell a flat ride from a rolling ride, but we could tell if there were going to be any big hills.  All in all, for the amount of land coverage on one sheet, we felt that this was an acceptable trade off. 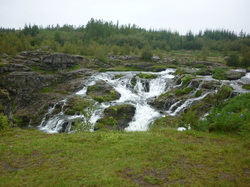 After heading to the bike shop in the morning, we started cycling much later than we had anticipated.  It was absolutely pouring with rain and I was really wishing I had researched a little more on how to get out of Reykjavik.  Usually, getting out of a city isn't too difficult, but the main roads out looked very much like our major motorways, not something we really wanted to cycle on.  We stumbled into the Elliðaárdalur city park which had lots of cycleways and allows you to get most of the way out of Reykjavik before having to cycle on Route 1.  If you're planning a trip, I would definitely have a look into this area to avoid the very busy roads.  It also looks like they're building a segregated cycleway around the north of the Reykjavik to join onto the cycleway along the harbour into town which will enable cycling on cyclepaths more or less the whole way out.
As soon as we got out of Reykjavik it stopped raining and the sun came out.  We climbed steadily on the 435 following the geothermal hot water pipes. 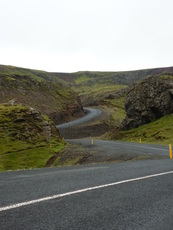 We hit the hills in the distance, just before Lake Thingvallavatn.  I've always been a sit and spin kinda girl, getting up anything slowly.  These however, were well out of my capability.  These were all very steep and short and with a fully loaded bike, impossible!  Once we'd spotted Lake Thinvallavatn, the worst of it was over, and looking back at what appeared to be near vertical roads, I couldn't believe we'd made it over those hills. Cycling along the lake on route 360 was beautiful and we hardly saw another person.  We did see the most confusing sign post we've ever seen, I'm glad we weren't relying on these and had our maps!

Once we hit the 36, the was a large increase in traffic, with plenty of tour buses and large 4x4s.  I'm glad we hadn't chosen this route out.  The general rule with choosing roads was avoid anything single digit, 2 digit was fairly busy, 3 digit was pretty empty, and an F road deserted.  A map which showed which roads were sealed and which were gravel was also very helpful.

View Iceland day 2 in a larger map
We woke up to a sunny warm day, a perfect day to explore Thingvellir.  The highlight of the Thingvellir national park is the rift between the tectonic plates of the mid-atlantic rift and it truly was spectacular walking between them.  It was nice to have lots of time to wander around and not have the time pressure of a tour bus.

We cycled along the lake and headed leisurely over to Laugarvatn where we visited the geothermal baths Laugarvatn Fontana.  This is an outdoor thermal spa with steam rooms heated by the geothermal spring.  I found that I don't cope well with the intense heat and steam and the smell was very sulphurous but the thermal pools were a very relaxing way to finish up the day.

I'd also highly recommend the local smoked trout and geothermal baked rye bread at the little handicraft shop/cafe across the road from the campsite, it's delicious!

View Iceland day 3 in a larger map
We woke up to absolute pouring rain.  It took a bit of willpower to get out of the tent and on the bike and once on the bike, it wasn't particularly pleasant with so much spray off the road and the driving rain, we were soaked within minute.  Well, one of us was.  Iceland will certainly test your waterproofs!  My Gore Paclite Alp-X jacket performed flawlessly all holiday.  Tim found that his mid priced waterproof was neither particularly waterproof, nor was it breathable.  Neither of us had waterproof trousers or shorts.  We couldn't see much of the landscape around us and so it was just a bit of a relief when we made it Geysir where we decided to camp.  We hid out in the giftshop/cafe a while, where we both decided to buy an expensive pair of 66 North waterproof overtrousers, an expensive souvenir but given we had another week and a half, they seemed a bit of a bargain!

We had a bit of a walk round the geysir geothermal area before going back to the gift shop to make the first of multiple and ever changing plans.  The great thing about having data and a weather app was that we could arrange what we were doing around the weather which turned out to be a bit of a holiday saver!  As we were staying for a couple of days the photos of Geysir below are from a couple of days, note the change from very grey to very blue sky!

Day 4 - Backroads and Gulfoss, then back to Geysir, 36km 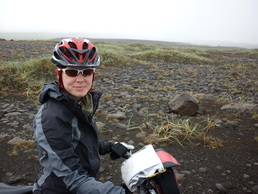 We headed out on the backroads to get a taster of what the minor roads and unmaintained roads of Iceland are like.  As mountain bikers, we didn't really struggle too much with the road conditions, other than when there was deep volcanic sand.  We were however realising how much tyre choice can effect the ride, both of us wishing we had our knobbly tyres on instead of our touring tyres.  The landscape had changed since we had last seen it, 2 days ago, much more barren. 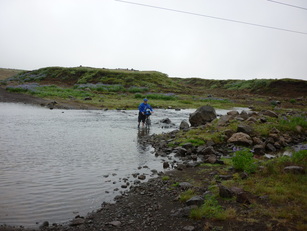 Today was supposed to be an epic circular ride up to the glacial lake, totalling 70-80km of backroads, lightly loaded as we were staying at Geysir again.  It didn't quote work out that way.  As we weren't carrying everything, just enough for the day ride, we managed to forget the sandals for fording rivers in.  Unfortunately, we didn't realise this until we hit the first ford,about 20km in.  There was no way to avoid getting our feet wet, so we had to minimise the damage.  We took, overshoes and socks off and crossed in just our cycle shoes which are mostly leather, plastic and mesh so didn't retain too much water.  It was still very cold, a bit squelchy and thoroughly unpleasant.

Looking at our proposed route up to the Glacial lake, there was going to be a lot of ford crossings, and with no way of knowing how deep or powerful they may be, we thought it was probably not a good idea try it in slippy cycle shoes 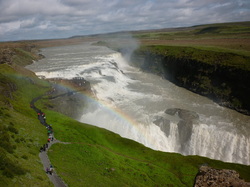 We came back by the main roads stopping in at the famous Gulfoss waterfall.  It really is a magnificent site, and seems strange that you can't see the bottom of the waterfall.  Perhaps you can if you go right up to the edge, but we'd had enough of getting soaked over the past couple of days so didn't!